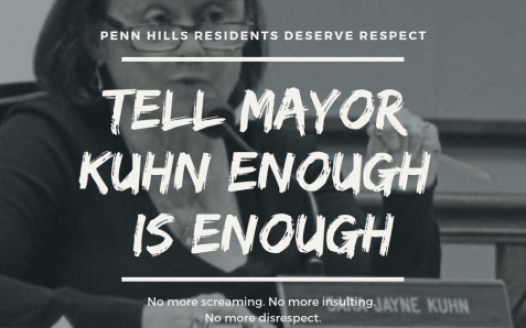 This is not a campaign slogan and this is not a tool of any political candidate. This is a petition to let current mayor of Penn Hills, Sara Kuhn, know that we will not stand for her insults, belittling comments, or screaming any longer. On March 18, 2019, Mayor Kuhn behaved in a manner unbecoming of any local official when she screamed at and threatened to remove a group of citizens from a Council meeting who had legitimate questions about corruption and mismanagement in Penn Hills. It is clear that Mayor Kuhn needs to be reminded that she serves the people, not the other way around. (Photo courtesy of Pittsburgh Tribune Review)