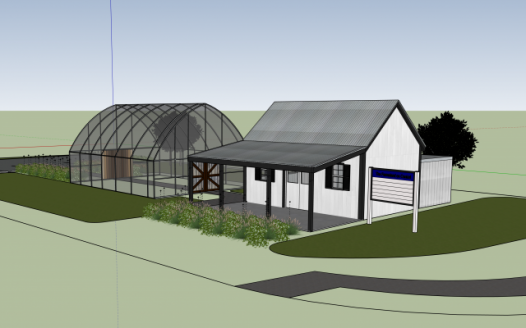 Bring the Farmstand to Carlisle!!!

Hey Neighbors! Michael, Savannah, and the kids here at the Farm on Central here in Carlisle OH. And today, we’re asking for your help!

We’re building a farm to feed our community and beyond and so far have had hosted many of you with the sunflower field. We have big plans for a bunch more fun activities and events this year!

Our goal when we started working last summer was to add a small retail store, around 400 SQ FT, to the lot directly across from the farm. We added a small greenhouse to the design when we found out all the improvements we were going to have to make.

Carlisle is a great small town, but there isn’t a place within city limits to buy a truly local, juicy tomato, or local dozen of eggs. We want to build a community-centered place where you can shop for foods grown in your community, picked only hours before, and walk the farm fields seeing where your food is grown!

For the last several months, we’ve been working with the City to get the retail stand across the street development plan finalized and approved. It's been slow, tedious work.

As with any development plan, there’s a lot of rules and regulations to comply with, and Tim the lot owner, and I have complied with a lot. We’ve granted an increased easement with the city which lost us 20% of the lot size, put in a complete lighting plan, a new drywell, etc.

Now, approval of our site plan has come down to three major sticking points with the city code.

According to the code, the parking lot needs to be behind the building. Our plan complies with the rule on Central Ave, but not on the Industry drive side especially since we had to grant a larger easement for the ROW and move all the buildings back.

The major sticking point is the code requires paved parking lots for any new usage. I know this is a well-worn issue here in Carlisle, with even some businesses having gravel parking lots, and until last year, the police department having a partial gravel lot.

I personally hate asphalt, the smell, how hot it gets, it just isn’t the ambiance that we want when folks come to shop the farmstand. A beautiful, well-maintained gravel lot is much more attractive in my opinion. But that’s beside the point, the code says paved.

We are asking for a 24-month extension of putting in the parking lot which will give us time to get set up, make sure that its the right move for us, and, as we plan on expanding it in 2023, not pave an area, just to tear it up in a few years or reconfigure it!

Another aspect that the code requires is sidewalks. Now, this one is chiefly a safety concern. There are no sidewalks on either side of the property, and for folks to get to the sidewalks they are requesting, would require a dangerous crossing of route 123. If we put in sidewalks, folks would be funneled to walk right through the yards next door, which the neighbors have already expressed dismay. Across the street, there’s no way to extend the sidewalks, and no way to cross the dangerous railroad/bridge crossing to the south. In addition, Industrial drive is heavily trafficked, with dozens of trucks a day, cars parking right up to the road directly further down the lot line, and NO sidewalks. We don’t want folks walking down into that area.

Again, we are asking for a 24-month extension on adding this to the site. That would give the City time to come up with a comprehensive plan that addresses the safety concerns that these sidewalks would bring up. We have already been in contact with the city council about possibly getting state funding for safer access in this area.

In all, these three lot improvements are around $40,000 dollars to comply with the code.

We want your help. The City and its ordinances are designed to work for the people, and if the people speak, they need to at least listen.

We are requesting the city planning commission grant us the three variances, one on the setback, and then only delay the sidewalks and parking lot for 24 months or so until we can put together stage two of the farmstand in 2023. NOTE: they have the authority to, and have in the past, granted variances for much more frivolous reasons.

Sign the petition, and show up Thursday night at 7 PM at City Hall in support of bringing a local community-minded farmstand to your town!

We want Carlisle to be a destination, not a drive-through!