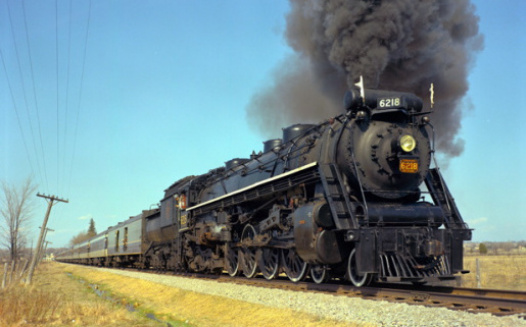 Built in 1942 by the Montreal Locomotive Works, CNR 6218 faithfully served the Canadian National Railway in fast freight and heavy passenger service until her initial retirement in 1959.

An example of the the very popular Northern class 6200 series, the 6218's retirement lasted only 5 years when she was restored and returned to the rails pulling popular excursion trips throughout southern Ontario between 1964-1971. After her second retirement the Canadian National Railway donated the locomotive to the Town of Fort Erie-ON to honour the region's railway heritage and large railway yard.

The town agreed the locomotive would be kept in a clean and attractive condition at all times, that adequate protection would be provided to minimize vandalism and that a suitable roof would be erected to provide overhead protection. CNR 6218 has been on display at the Fort Erie Railway Museum since 1974, but unfortunately, erecting a roof or shelter over the locomotive has never been economically viabile.

As reported in Niagara This Week, four decades of exposure to the elements have taken their toll on the 6218. The locomotive has accumulated a great deal of surface rust and is, in fact, rusted through in several places. The Town of Fort Erie is now faced with an important question....what to do with CNR 6218?

There are several options being discussed, but the Niagara Railway Museum feels the best way to preserve this important historical artifact is to move it to our facility located inside the former Canadian Nation Railway yard shops in Fort Erie-ON. Our museum is located only a short distance from the Fort Erie Railway Museum, but offers a physical building in which CNR 6218 can be protected from the weather and cosmetically restored.

The Niagara Railway Museum has been preserving and displaying railway artifacts with historical relevance to he Niagara Region for 20 years. We would be honoured to help the Town of Fort Erie preserve this important piece of its history and share it with future generations.

By signing this petition, you are voicing your support of the Niagara Railway Museum's proposal to have the CNR 6218 moved to our location in Fort Erie-ON for indoor storage and cosmetic restoration.