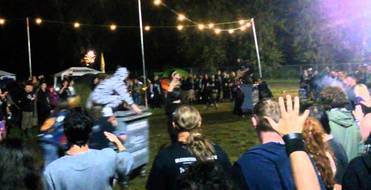 Bin Jousting. A feat of endurance and sheer determination played out within the campsites of Boodstock Open Air festival year in year out. Often a bane of security staff's lives, I propose that a bin jousting arena is set up (similar to that of the full contact sword fighting arena) in which participants sign a liability waiver to allow them to participate in what has become a true bloodstock tradition, without creating what is currently a health and safety nightmare in the eyes of officials on site.

Making the bin jousting available to those who wish to partake, in a controlled environment and waiving all liability from the festival organisers (much like an assault course, extreme sports or paintballing would require) would additionally draw more festival goers into the main arena at scheduled times and would allow security staff to focus on more pressing issues. Introduce a score board, league table for the teams of bin riders and pushers and perhaps a prize at the end of the weekend and we could really take this world renowned Bloodstock legend to the next level.

Let's do this, people of BLOODSTOCKKKKK!