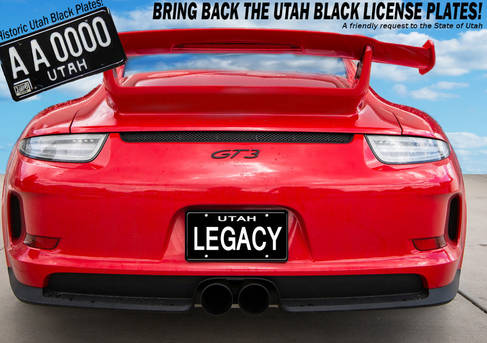 We have asked the State of Utah to consider bringing back a current version of the handsome retro Utah license plate (black with white lettering) that was used for so many years and name it the "Legacy" plate. Senator Fillmore has introduced the bill and we need at least 500 Utah residents that have vehicles registered here to show interest. Once that level has been met, and if the bill passes, the State of Utah will require at least 500 registrations be pre-sold before production. So for now, please show your interest by signing the petition in support of the idea and let's make Utah's license plates great again! *Update: AMAZING! Over 500 signings in just 4 hours! Let's keep the signings coming in to show the state just how interested we are! **Update 12/2017 - Senator Fillmore is now sponsoring this bill (SB41) so we're on the way! ***Last update, 2019 - Mission accomplished! This bill (SB41) was signed into law by Governor Herbert but is currently stalled due to an old requirement that states plates should have certain reflective qualities and there is no black reflective paint currently on the market. Utah will have to update this outdated requirement or change processes of plate making like other states have done, by printing plates instead of stamping them. Stay tuned and keep your fingers crossed.- Johnny Lange