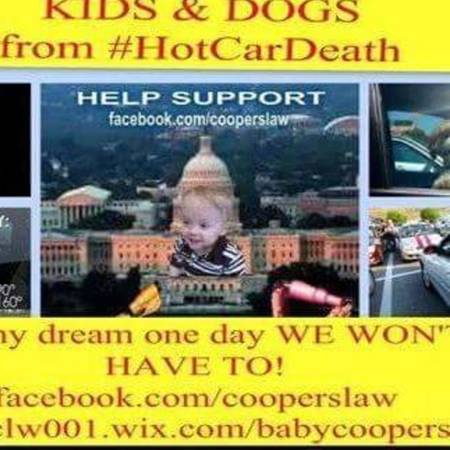 37 Kids a year die IN #HOTCARDEATHS .. IN 2016, 12 KIDS , 3 POLICE DOGS, AND COUNTLESS CIVILIAN ANIMALS HAVE DIED ALREADY.. Not to mention the many cases of near misses when someone came along in time to rescue the child or animal from peril. Its time this madness ends.. BABY COOPER'S LAW SEEKS TO END HOT CAR DEATHS WITH MAKING leaving a child or animal in a hot car a FEDERAL FELONY/MISDEMEANOR RESPECTIVELY.. This insures uniform charging and penalties. Protection from civil and criminal prosecution for civilian rescuers effecting a rescue. Finally the MOST IMPORTANT ASPECT OF BCL IS MANDATORY CAR SEAT ALARMS by 2021. Car Seat Alarms based on motion and Carbon Dioxide emissions will insure babies and animals will be saved in the cases that are claimed to be accidental and the meaning of what was intended when a child or animal is left will be clear and THERE WILL NO LONGER BE THE OPPORTUNITY FOR EXCUSES .. WE the undersigned, respectfully come now and petition the Congress of the United States, the Secretary of Transportation, and the National Transportation and Safety Board as well as the National Highway and Traffic Safety Administration to end once and for all Vehicular Heat Stroke related deaths of Children and Animals by the implementation of the proposed attached legislation known as Baby Cooper's Law to end hot car death of animals and children. Thank -You