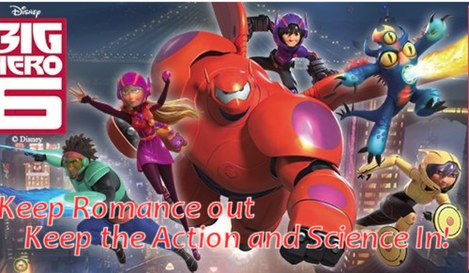 Keep Romance OUT of Big Hero 6!

Thanks for taking a look at the petition!

As some of you may know, Big Hero 6 was just announced to have a TV series to be released in 2017! (..Yay ...?) We are also unsure if it's 100% true if we are getting a Big Hero 7. However, rumors have been filled with inklings of there being love interests.

This has not only bothered me but quite a few others I've noticed. So I've decided to make a petition to try and help put everyone's worries at ease. With your help we can stop them hopefully from making Big Hero 6 have an underlying love story. All we need is your signature!

Some of you may be asking, Why is a love interest a bad idea?
A fair enough question! So I'll explain.

In the Big Hero 6 fandom we're a pretty tight nit community last I checked. Well, why is that..? Some of you may or may not have given it thought. However, I have from the moment it started until today. 2 years later! We as a fandom have survived because we haven't had to worry about flame wars or pairing wars/love interests. Unlike other TV series or movies.. *motions to Steven Universe, Pokemon, Teen Titans Go!, Teenage Mutant Ninja Turtles, Sonic the Hedgehog, Gravity Falls, Avatar: TLA and Legend of Korra*, who have really had a hard time with keeping their fandoms together and not having people hate them. Seriously, Steven Universe being the worst of all with multiple pairings and having 2 different people in the fandom ganged up on and told to kill themselves because of their ship that was "hinted at" in a couple episodes. - Don't even get me started on the amount of teenage drama and fights over Casey/April or Donatello/April that have broken out because of the indication of both pairings. Nor the many problems of the Avatar/Korra fandom.

Especially those with Fan Characters get to pair with their favorite Canon without being out-casted. This is something that will happen if any of the Canons (That's Hiro, Honey..etc) get paired up. The Fan Character (one a fan has made), will end up being the target of bullying, and told that no their "pairing" or "idea" can't happen because it's not, "Canon". That so and so is with...blah blah. So many problems can arise!

So now you may ask,Okay, so besides that why are you against it?

Outside of all of that, it's just the fact that almost all of us were drawn to Big Hero 6 for some very particular reasons and NONE of it was because of "Pairings" or "Love Interests".

Most fans, myself included, were brought into this movie because of one thing. It was relatable! We could all relate to at least one of the characters. We had something in common, be it a love of science, the dream of becoming a top chemist, technician, creating something new and amazing, being the one that has no skill in the science field, but plenty of knowledge on it from being an enthusiast - and still contributing even while being a comic nerd - - and not a stupid slobby comic nerd at that.

We were drawn to Big Hero 6 because of the story about 2 brothers and a GREAT group of friends! A story about loss and how to cope with it. A story about life being awkward and being antisocial or socially awkward. About it being A-OK to be different and have friends who aren't exactly the same as you...because together you can use all of your talents to make something great.

We came here for the technology, the story, the brother bonding, the friendship and of course the action and super heroisms!

6 Independant strong individuals who don't need anyone but themselves and their friends from time to time. Strong women who don't need a relationship and strong fun guys who aren't concerned with "the ladies".

It's not that I'm against any pairings myself. I mean, I have my own ships for the BH6! It's just we prefer to keep that for us the fans to decide on who we want to ship rather than have you guys at the company do it for us! <3 It gives us more opportunities, different "angles" to look from on every pairing, and not being stuck with one! It allows us to experiment without having one particular one shoved in our faces, or two...and having the fandom go crazy trying to kill each other over who is the better pairing.

I hope you can understand the points we're trying to make here. If you agree, please feel free to sign the petition!

P.S. If you guys keep the romance out of the series, I can promise you it's going to be a HUUUUUGE hit and one of the best TV series to hit the TV in a long time! :) - - Hmn, but to be a little open, I wouldn't mind seeing Aunt Cass possibly date someone! That..would be about the only one I'd be up for.