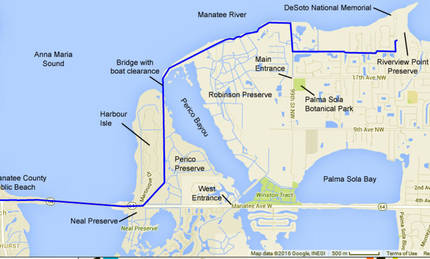 We, the residents of and visitors to Manatee County, petition the County to construct a bicycle/pedestrian trail as illustrated here. This multi-use pathway has been in “future plans” since 2002 as part of a trail between Historic Bradenton and the Manatee Public Beach on Anna Maria Island. That trail is the No. 1 priority as listed on Table 6.4 “Regional Projects” in the “Bicycle Pedestrian Trails Master Plan” that was adopted as part of the MPO Master Plan in 2013. This trail would provide a safe route for pedestrians and bicycles between Anna Maria Island and the Palma Sola area of Manatee County instead of traveling along State Road 64. It is also in compliance with the numerous sections of the County’s Comprehensive Plan and would be a tourist magnet that would improve the local economy. In addition, it would promote healthy exercise, would help reduce serious congestion on SR64 and on the Island, and would reduce air pollution. It would also connect to planned trails on AMI that will run the length of the island, connecting the three island communities and possibly become part of the SUN Trail. We request that the Manatee County Board of Commissioners support this plan and direct the Public Works Department to apply for grants for this trail, including SUN Trail grants.