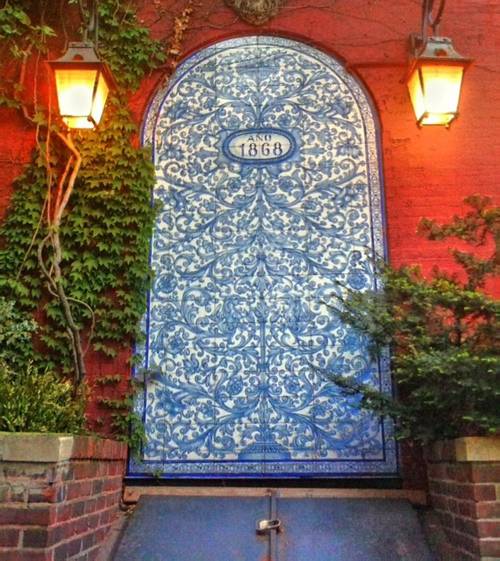 HELP SAVE THE TILE MURAL AT 88 PERRY STREET

The Landmarks Preservation Commission (LPC) has issued a violation to the owners of 88 Perry Street for the beautiful tile mural that has graced the north wall of 88 Perry for over forty years.

Prior to 1972, the north wall of 88 Perry was a drab brick wall reflecting the building’s tenement status. When the building was renovated in 1972, the owners commissioned Fábrica Mensaque Rodríguez y Compañia, a world renowned artisan maker of “azulejo” tiles from Seville, Spain to create the tile mural for the recessed area in the wall. Since then, this work of art has been an essential component of the neighborhood’s beauty, character, and charm. It has been widely photographed by locals as well as passing tourists, and it has become a beloved local landmark.

Because the alteration was never approved by the Landmarks Preservation Commission, after 43 years, LPC would still normally require the owners to return the exterior of the building to its previous tenement appearance. We feel that this is wrong, and instead we hope to obtain a permit from LPC to keep the mural as is. Please show your support for maintaining this beautiful mural by signing this petition and getting others to sign. For more information, please call Maria Noy 212-929-0510.