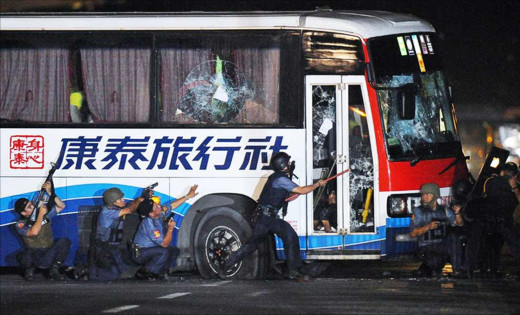 8.23 Manila Hostage-Taking Tragedy
Petition to Call on Beijing and HKSAR Government
to Demand Justice from the Philippine Government
We Can Never Forget.  Justice Undone!!
Two years after the Manila hostage-taking tragedy happened, the Philippine government still refuses to shoulder its responsibility and remains apathetic to the suffering of and the call for justice from the injured and the families of the deceased.
Last September the Chinese Premier Wen Jiaobao urged the Philippine President Aquino to attach importance to demands of the HKSAR government and people and to properly handle the aftermath of the tragedy, however, so far the Philippine government still refuses to apologize to or compensate the victims.  There has also been no serious action to hold the relevant officials accountable for the botched rescue as the Philippine government has adamantly ignored the recommendations in the investigation report from an independent investigation committee to put forward criminal charges and only opted for administrative charges.
Of the 6 cases filed, only one case has concluded, wherein the official was only suspended from duty for 11 days, and two days after the suspension, the official was promoted to a higher position!  There has been no progress regarding the other five cases in the past 12 months.
Besides, a research report has pointed out that kidnapping cases in the Philippines have increased in 2011 from 2010, averaging at more than 10 cases a month.  Many kidnappers have targeted at foreigners and Chinese in Metro Manila, and some even reportedly have police participation in the kidnapping.   There is still no security for tourists in the country.
Therefore, we sign this petition to urge Beijing and HKSAR government to take action together to demand the Philippine government to act responsibly, to ensure justice is done to the victims, and to defend the dignity of Chinese people.