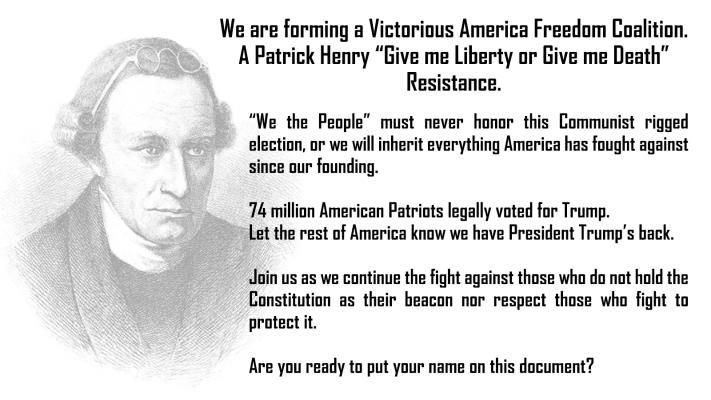 74 Million American Patriots Will Defend The Constitution From A Communist Rigged Election. We Will Not Be Silenced, Dismissed Or Rejected!

We have to show the Supreme Court how many people are standing against this fraudulent election, which was masterminded by Communist forces from within, who declared war on our Constitution, everything our free Republic stands for.

This is a petition about the destruction of what brings justice to all people: The Constitution of the United States of America. This must be the biggest petition ever signed in our history.

The largest petition ever signed was about a singular injustice and it was signed by 17 million people in a few days. 74 million people legally voted for Trump and we are asking for 30 million patriots to sign this petition. If Social Justice Media can get such large numbers on their petition, why can’t we not get 30 Million American Patriots who will defend the Constitution and President Trump no matter what!

This is a petition about the survival of America and the free world.

“If you’re barking at the curtain of Tyranny but are unwilling to tear it down, you’re authorizing the Tyranny that you claim to stand against, thus wasting your time and the future of our country.”

President Trump has fought for us and now we are going to fight for him. We will not let him be railroaded by a rigged election. Remember, 74 million people who legally voted are ready to defend the Constitution if we do not get a fair shake even if we are heard by the Supreme Court. America must remain free! If we are not willing to risk our lives to defend our free Republic, then what will be left to defend?

I am On Board!