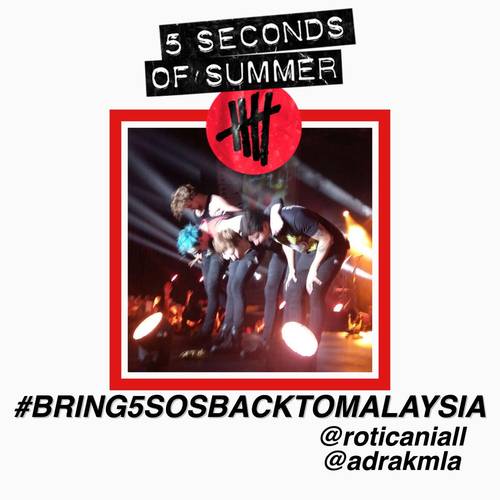 294 people have signed this petition. Add your name now!

WE JUST NEED THEM BACK HERE.

It sucks seeing every country gets so much love from 5 Seconds of Summer but not Malaysia.

Yeah, we're not being only jealous but it seems fishy, especially knowing about that interview and Calum about that Malaysian accent thing. And we're really sorry for that.

I just want 5SOS to know that Malaysia really loves them and we really really do.

When 5SOS first arrived in Malaysia, the band account tweet nothing but the poster, only the next day Ashton and Luke tweeted. Not even Calum or Michael. Ashton was nice enough to update on him (I don't know what happened to the other 4) being a lovely tourist and going to places such as the bird park and stuff.

When the concert started, 5SOS were so enthusiastic about Malaysia, said they loved our food during soundcheck, said we were the best looking and loud crowd, even said Malaysian words that honestly made thousands of Malaysian 5SOSFam happy!

Yet, I don't know what went wrong because maybe the trip was a day and a half but, they hardly tweeted and I'm glad enough Calum talked about Malaysia in their Snapchat and Ashton also, with Michael in their snapchat a couple hours before the show started at 8PM.

So, I, with all of my heart, would like you to help the Malaysia 5SOSFam to make sure 5SOS comes back to Malaysia or else it'll be the last time they'll eat satay.

I mean we have Nasi Goreng too here you know!