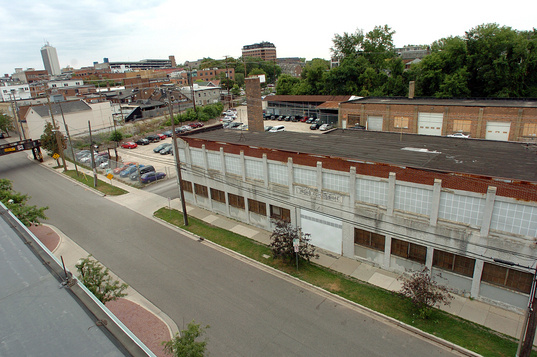 The lot at 415 W. Washington currently consists only of a dilapidated building and a parking lot. The main building was made in 1925 and the brick garage in 1930, and both are considered to be historical buildings. These buildings were initially used by the Washtenaw County Road Commission, and later by the city government as office space and a service yard. Both buildings have been boarded up for almost 20 years and serve no real purpose. In the past there have been a couple proposals about what to do with the property but none ever gained traction within the city government. This is because of a variety of reasons, most recently in 2008 the recession tabled such discussion as it wasn’t a major priority in the community at the time. Now that the economy is in a better place, our group believes it is the perfect time to begin talking about possible changes to the property.

Our group proposes that the city should turn the 415 West Washington Lot into a park. By turning the vacant property into a park, the overall climate downtown would be improved, and it would provide a safe green community space for nearby residents. Additionally, getting rid of the decrepit building would help improve the property values of the surrounding area. We think this property is in a prime location to create a friendly and welcoming environment as well as bringing more attention to a downtown area that has more potential than most Ann Arbor residents are aware of. Next, we conducted a survey to gauge community interest on the property, and with over 170 respondents, the results were encouraging. We now ask you to help us build support for our issue by signing this petition.