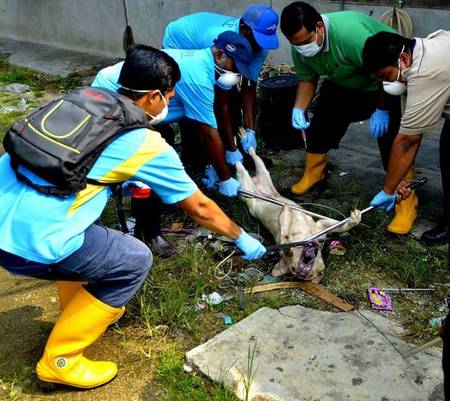 10750 people have signed this petition. Add your name now!

Malaysian minister, Lim Guan Eng, to 'destroy' ALL stray dogs in Penang, Malaysia, after 2 confirmed rabies cases. These dogs will be rounded up and murdered in cold blood whether or not they are infected.

Instead of attempting to rectify the situation and coming up with solutions, Lim Guan Eng has described the killing of stray dogs in Penang as a 'micro' problem. The Malaysian minister has also warned that pets who are outside of private property risk being caught and put to sleep as well.

We demand that Lim Guan Eng will reconsider his actions and come up with a sane solution for this problem. Is the answer to kill every single dog every single time someone gets infected with rabies? What about the dogs who are not infected who will be murdered in cold blood for no good reason at all? Should these dogs die in vain when there is a vaccination easily available that prevents rabies?

Lim Guan Eng refuses to back down on the mass killing of strays. Although NGOs in Malaysia have advised to vaccinate the animals, he is choosing to ignore their plead. "Why is this becoming a controversy? They are strays, not household pets", he said. Full story here:

Penang, Kedah, and Perlis have begun killing the strays. WhatsApp conversation between Lim Guan Eng and Wani Muthiah, animal activist and founder of Malaysian Dogs Deserve Better (MDDB), indicates that local councils have been murdering strays without notifying the public.

Lim Guan Eng has rejected help from Mission Rabies (http://www.missionrabies.com/) and Worldwide Veterinary Service (http://wvs.org.uk/). MR and WVS offered to sponsor the cost for the vaccinations and come to Malaysia to help vaccinate the strays. This has been highlighted to Lim Guan Eng, but the Chief Minister of Penang is adamant on destroying the strays.

The public was informed that the local council would "humanely euthanize" the strays to get rid of them. However, they have resorted to SHOOTING the animals. Last time I checked, the use of guns are ILLEGAL in Malaysia and since when is the word humane synonymous to shooting?

Dr. Afif Bahardin, Penang State Executive Councillor, said that the state would cooperate with NGOs if NGOs "can come out with measures to control of the spread of rabies". As stated above, Mission Rabies (http://www.missionrabies.com/) and Worldwide Veterinary Service (http://wvs.org.uk/) have already offered help. So what exactly is the Malaysian government waiting for?

Health Ministry director-general Datuk Dr Noor Hisham Abdullah said "None of the people bitten by dogs in Perlis, Kedah and Penang have been infected by rabies. However, 10 of 39 dogs which bit them have tested positive for the disease." Sounds more like the Malaysian government just wants to get rid of the strays.

Lim Guan Eng says he is willing to lose votes over the mass extermination of stray dogs. "They have said they won't vote. That is their right. You don't vote, then you don't vote la", he said. Is this even about rabies anymore or does the Chief Minister just want to rid Penang of strays?

Lim Guan Eng asks World Veterinary Services to send the Malaysian government some vaccine if they are sincere. He also said, "Also if they are sincere, come to Malaysia or to Penang and discuss with the veterinary experts here because we are on an emergency rabies alert now... we need stern and immediate action". So Lim Guan Eng wants free medicine, but is not clear on whether or not WVS is allowed to bring their team to Malaysia. Sounds more like he's stalling.

If all mammals are possible rabies carriers, are we going to let Lim Guan Eng kill every single animal until he is convinced that Malaysia is rabies-free?