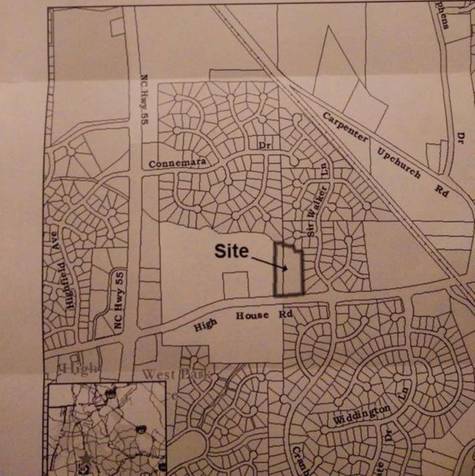 There is a proposed rezoning of a parcel on the north side of High House to build 12 homes adjacent to the Berkeley subdivision.

THIS IS THE PROBLEM:

1. This rezoning (added to the 2 recently approved rezonings on both sides of High House) will add 100+ homes and their associated traffic to our area. Already, it is currently nearly impossible to turn left out of Berkeley to go east on High House Road. The U-turn for Wellsley residents at Cranborne Lane is also difficult and dangerous.

2. The new neighborhoods to be developed on both the north and south sides of High House Road will share a median cut similar to the Cranborne Lane / Berkeley cut. The increased traffic flow associated with these new residents will create more easterly flow on High House towards Cary, further inhibiting flow through the Cranborne Lane / Berkely cut. In addition, the High House Road / NC Hwy. 55 intersection will see increased turn lane stacking and backups due to these new residents.

This 3rd rezoning will only add 10 homes, and there isn't likely to be much opposition to its approval. This iPetition is being circulated to let the Town know that residents who will be negatively affected by these new neighborhoods demand that a Traffic Study be an integral part of this 3rd re-zoning effort. The previous 2 rezoning proposals were each submitted to the Town with densities less than the 100-home Traffic Study trigger (obviously pre-calculated). This Traffic Study will most likely find that a new traffic signal is needed at the Cranborne Lane / Berkeley interchange. Knowing that the current traffic situation will debilitate in the near future with the new residents' traffic, Berkeley and Wellsley residents would most likely welcome the addition of a new traffic signal.

We need as many voices as possible to let them know that WE NEED A TRAFFIC STUDY because this ABSOLUTELY will make a bigger mess of these intersections than they already are. Please sign and forward along to anyone who may be interested, so that we can push for this to be considered as a requirement of rezoning.

The Town Council has scheduled a Public Speak Session for this case on Thursday, Feb. 25.