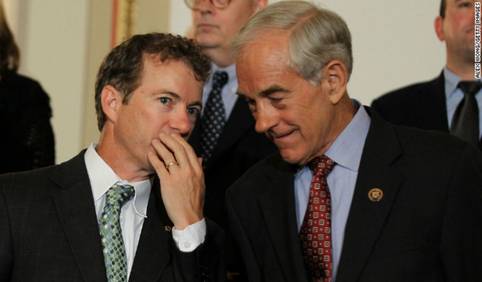 Through the last two presidential elections, it has been made clear that Republicans cannot win the presidential office without one of three groups of people.

Christian voters who vote according to their conscience. (why Romney lost)

Liberty voters who vote according to a candidates support of the Constitution. (why McCain lost)

I personally happen to fall into the latter two groups. I agree with Sarah Palin that the Republican party really shouldn't marginalize me as a supporter of Dr. Rand Paul. I've written this pledge to show that my support for the Constitution which I swore an oath to defend, is not up for compromise.

I wrote this to pledge that as a Believer in Jesus, its not okay for me to betray my conscience and then patch it with a bandaid prayer. I cannot betray my fellow American by relinquishing an inch of ground over the Liberty made possible by that constitution.

The established Republican party often looks no different from democrats.

Donald Trump is poised to split the Republican vote, or win the nomination through intimidation by threatening the same. The Republican party has allowed an admitted Obama supporter to become its front runner, and I have completely lost all faith in the Republican party. In my opinion it appears as if the establishment party would rather see Hillary win, than Dr. Rand Paul.

As such, I have pledged that I will only support Dr. Rand Paul for president of the united States. I have asked for at least 10,000 others to stand with me and pledge that they will also write-in Dr. Rand Paul's name as a protest vote; we have considered this carefully, and realize that the Republican party would be happily willing to give Hillary Clinton the presidency this election.

I will not stand idly by, and I will not be a part of this travesty.